I will give Sumner Smith the benefit of the doubt, and answer his question, because I suppose it is a reasonable one. And it is refreshing to be …

What would bring Corbyn supporters to vote for Starmer, you ask? Pay attention then

Assessment of the symptoms listed displayed NO evidence of a pattern of milder illness.

Omicron does NOT produce ‘milder symptoms’ per se: REBLOG

Charlotte needs our help to keep going, she selflessly helps other but has had a difficult time with long Covid. Please! Help with a donation if you are in a position to.

Well it came as no surprise to see that the government ignored the petitions signed by the public, demonstrations from DPAC (Disabled People Against Cuts) and pressure from MPs to end the £20 Universal Credit that was introduced during the pandemic.

I and many others expected this to happen because the Tory party is an evil, cruel machine that won’t stop until the poor and disabled are gone and destroyed. They want the working class totally compliant to their needs and not their own, this has been proven in the policies and decisions that they make.

Universal Credit wasn’t constructed to help people, instead it does the opposite. If you’re unemployed the payments given aren’t enough to live on let alone survive. If you’re working you can never satisfy the system and are put under immense pressure to find more working hours.

As well as the reduction of monies given…

“There is something to be ashamed of in bluffing that you know the science when you clearly do not, and then trying to lecture others on it.”

The headline in this story is a paraphrase of an extraordinary letter sent out to 15,000 people this month randomly chosen by the Department for Work and Pensions.

The ministry has mounted an exercise to check fraud and error in payments for the state pension alongside universal credit, attendance allowance, PIPs, carer’s allowance, pension credit, housing benefit, and the employment and support allowance. It is run by the Performance Measurement Team. The ministry are asking people to send them original documents showing their savings, pay slips, rent books and tenancy agreements.

The £20 uplift to Universal Credit must be continued for people to survive. The Tory government are hell bent on murdering people by stealth, it’s never their fault but it bloody well is and I lay the blame
for 130,000+ deaths at the Conservatives feet. May they all rot in hell for what they have and still are doing to our Country.

I’ve spoken to many people and helped hundreds of people over the years since Universal Credit was first implemented in my local town, which incidentally was one of the three ‘trial’ areas for Universal Credit introducing it to an unbeknown community.

Out of all the people that I’ve spoken to throughout the years, not one of them has told me that their payments provided them with a large enough income for them to survive, indeed the opposite applies.

Everyone that I’ve helped or spoken to were and still are living in poverty, unable to provide the very basics for themselves and their families.

Then the pandemic hit us, killing thousands and resulting in survivors battling with Long Covid. The government decided that they’d throw a lifeline to Universal Credit claimants which was an extra £20 a week uplift to help them through the pandemic.

The uplift was and is providing… 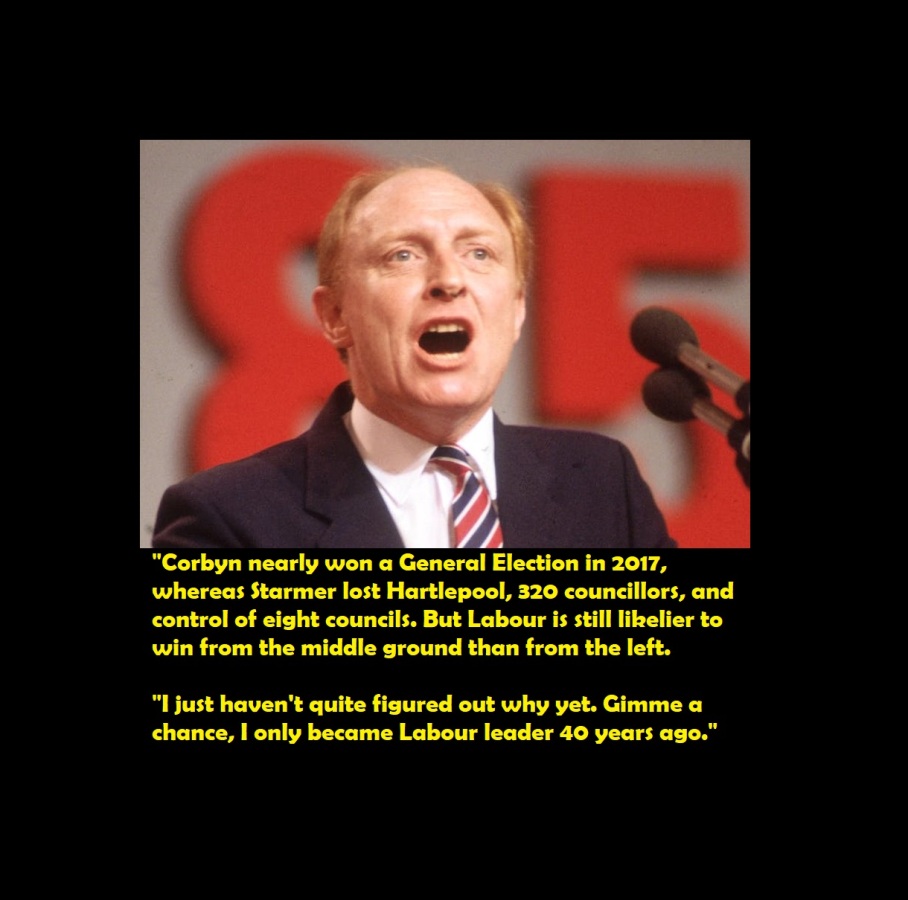 Brilliant analysis by Martin of Labour Right Wing… a must read

One of the worst failings of political debate in this country is that fallacious reasoning, including macho stubbornness, often overrides ordinary logic, and Occam’s Razor is frequently substituted with confirmation bias.

The Labour Party leader of much of the 1980s, Neil Kinnock, was a superlative example of this attitude. He had come to the leadership in place of Michael Foot, after the calamity of the 1983 General Election, which saw Labour’s vote plummet, and the Tories score a landslide 144-seat majority. Kinnock, a Welsh coal-miner’s son and a staunch left-winger up to this point, deserted almost every single one of his principles within days of winning the leadership. He lurched firmly to the right, having been convinced that the reason Labour lost the Election was that Foot had been ‘too left wing’ in his policy platform.

Not left, not right, just general chaos the real problem

Please read and if you are able please give a small donation to help Charlotte Thank You!

Dear readers and subscribers, you I get have realised that Ive been pretty much out of action this past week. I apologise for this, I feel awful about it and I hope that it doesn’t happen again.

Ive been struggling to get through this last rebound due to needing more meds and waiting for them to be processed.

I’ll be honest with you, I’m feeling pretty low at the moment. This past year has been a complete nightmare and so far it doesn’t appear to be easing.

My health is pretty rubbish at the moment, it takes me much longer to do tasks that I didn’t used to think about. My daughters more than fed up with me being ill and I do feel like I am to blame for this. Being a single parent is tough when you’re ill.

Yesterday I learnt that the support that I was getting…

An in-depth look as to why the West & especially the UK will not denounce the murderous apartheid regime of Israel.

It seems that nothing the Israeli Government ever does to the Palestinians will meet with meaningful condemnation from Western Governments. So long as the theft of Palestinian land is done quietly and in small slices, and so long as summary killings of Palestinians by Israeli soldiers are done just a few at a time, the USA, Britain, France, Germany etc will turn ‘Nelson’s Eye‘.

It must be something of a mystery to the people of the former Palestine themselves. Why do the West keep letting them get away with it? they can hardly be blamed for asking. Is it racism? Is it because Israelis are ‘whiter’ than Arabs?

To be honest, racism may well play a role in the thinking of many, but more so in Israel than outside. In international terms, the real reason Israel gets away with so much is far more a…

That the Labour Party needs to win back support in the doubtfully-named ‘Red Wall’ is hardly a secret. Without the backing of lost seats in its former Heartlands across the north of England and Wales, it seems like only a total inversion of British politics, of the type seen in the USA in the 1930s, would be the sole path back to power i.e. by moving further to the right even than the Conservatives and stealing Tory Heartland seats.

Unfortunately, yet another in the very long list of failings in the current Labour Party leader has been exposed this week. Plans were leaked of what Keir Starmer will be using…